Enjoy with the Hotel Trieste a relaxing and wonderful stay in Roccaraso.

On the left of Sangro river and in the Majella National Park, Roccaraso is in the middle of the Cinque Miglia upland and for centuries were the crossroad for transhumance and trades between the North and the South.

Who reaches Roccaraso maybe does not know that, where nowadays are hotels and many other modern buildings, once there was an ancient and blooming community. Archeology shows, thanks to many graves and objects which were found here, that the first settlements were in V and IV centuries BC yet. Tito Livio told us about Hannibal, who twice crossed the passage in Roccaraso, in the autumn of 217 and in 211, moving from Capua to Sabina, to attack Rome.

Historical documents do not say anything about the history of the upland villages and, then about Roccaraso, up to the XI century. During the Second World War, the village were destroyed but it was rebuilt thanks to those who lived in Roccaraso, which bloomed again in few years.

Today Roccaraso is non only a ski resort: spring, the sunny uplands in summers, the stunning autumn colours, make it the perfect place to stay for your holiday in Abruzzo.

Local tourist guides organize wonderful walking tours and horse rides to discover places where it is possible to meet the animals who inhabit in the Majella Park or in the National Park of Abruzzo, Lazio and Molise (deers, roe deers, wild boars, hares and foxes) and, if you are lucky, you can admire, in the distance, the Marsicano bear and the wolf of the Appennini.

Who loves peace and calm and want to enjoy the 1.250 meters above sea level coolness, will find many amusement and entertainment chances: carnivals, cultural and sport events and much more...

In summer 2007 was also opened an “Adventure Amusement Park” where who looks up to Indiana Jones can live a true adventure experience, in total safe.

Moreover, few kilometers far from Roccaraso, in winter and in summer, it is possible to spend with children some relaxing and funny moments in the amusement park “Coppo dell'Orso”, where anyone can practice snowtubing, electric miniquad, elastic carpet and inflatable toys as well as helicopter flights and horse riding. 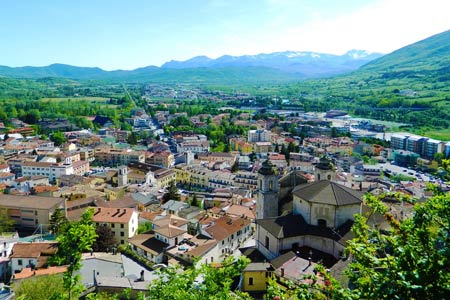 In Plebiscito Square there is a 1898 fountain and San Giovanni Battista Church; then, you can find two really important monuments: De Petra building, which was built in XIII century and that is the office of the Patiniana gallery, dedicated to Teofilo Patini, a great artist who born here and Santa Maria Assunta, which is the most important Church in Castel di Sangro and it is in the Old town.

A special mention deserves the Aufidenate Civic Museum, in the Maddalena monastery, into which there are many archeological evidences such as roman statues, headstones, bronzes among which the famous “Sannita bull”. 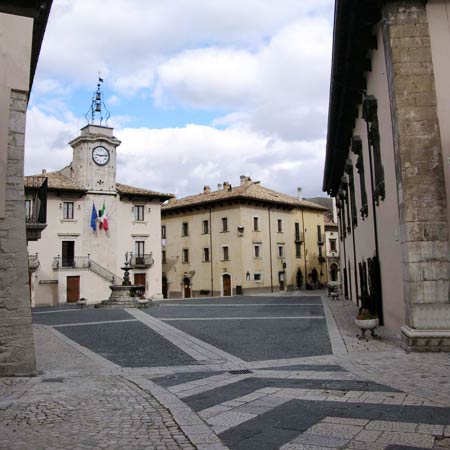 Is a really ancient village, close to the Hotel Trieste, founded in the X century. From the earlier centuries, Pescocostanzo was more important than other villages but it had not so good relations with feudatories and religious institutions. Very important for Pescocostanzo was 1774, when the city had the main title of Universitas Sui Domina, which is nowadays the motto you can find on the coat of arms.

In that time in the village were welcomed attorneys, philosophers, historians, intellectuals and artists. Their influence it is still visible in the lots of books many families have and in the numerous geniuses grown in Pescocostanzo. 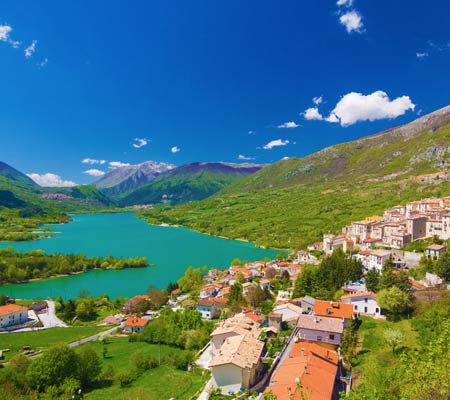 In the neighborhood of the lake, three villages rise: Barrea, Civitella Alfedena and Villetta Barrea, three fascinating places which preserve the old soul of the ancient towns of the Appennini, that nowadays are in the National Park of Abruzzo.

In Barrea there is “Lo studio”, an ancient Benedictine monastery, S.Tommaso Church, from the XV century, Lake Church and the Medieval Tower.

Famous is the Centro Rapaci, from which you can delight a wonderful view on the Foce. In Villetta Barrea there are also interesting houses of 1500 and S. Maria, S. Michele, S. Sebastiano and S. Rocco Churches. From Barrea Lake there is the chance to have excursions through the paths among the mountains, looking for the numerous and fine Park's fauna. 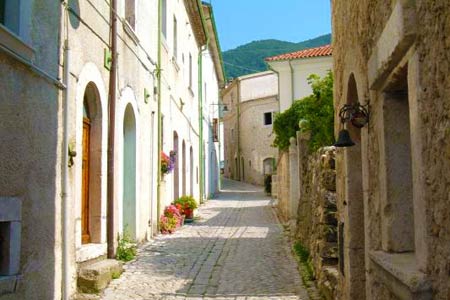 It is the destination of may visits because here the National Park of Abruzzo has its Wolf Museum and you can find the habitat of the wolf itself and of the lynx. 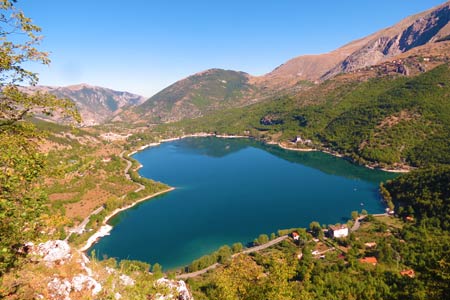 One of the most beautiful valleys you can reach from the Hotel Trieste is the Sagittario Valley and you can also go in one of the most known and appreciated villages among tourists: Scanno, of which important photographers such as Cartier-Bresson, Giacomelli or Scianna took some pictures.

The most important monument is S. Maria della Valle Church, in which you can see marble and wooden decors, made by famous artists from Pescocostanzo and by the Bencivenga, cabinet-makers from Raiano. Other remarkable sacred places are the baroque S. Eustachio Church, S. Maria delle Grazie Church and S. Antonio from Padova. In the neighborhood, it has to be seen the striking Madonna del Lago (“Nunciata”) Church, right on the lake. 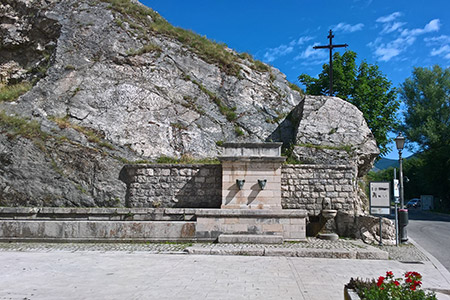 Founded with the name of “Peculum Seroli”, which means “protuberant rock on the Sangro river”, Pescasseroli rises in the Sangro Valley, in the middle of the National Park of Abruzzo, of which the city is the settle. Here you could admire some typical animals of the Park like bears, wolves and deers. In the middle of the village, which has an ancient structure, there is the Sipari building, made in 1800, the house where Benedetto Croce born. 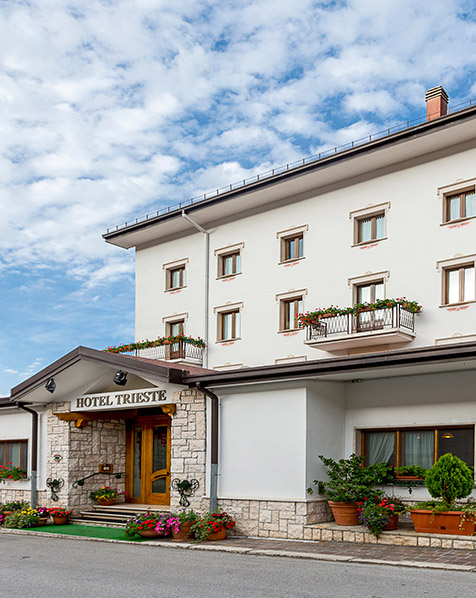 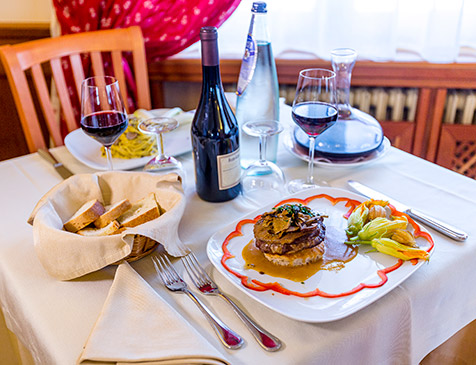 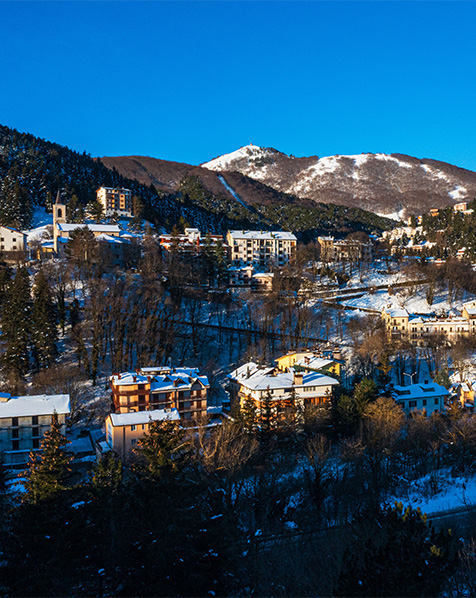 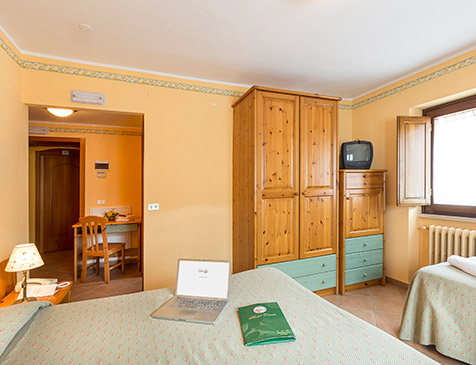